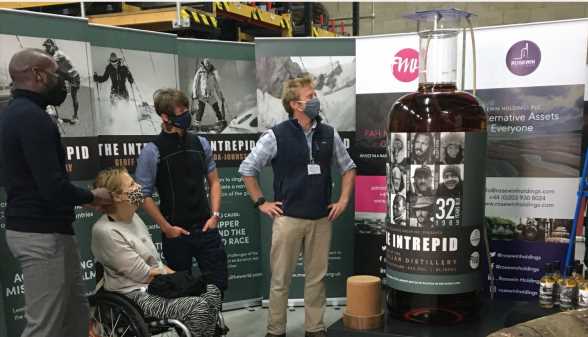 The world’s largest bottle of Scotch whisky, The Intrepid, standing at 5ft 11 inches tall and filled with a record-breaking 311 litres of 32-year-old The Macallan, will be auctioned by leading international auction house Lyon & Turnbull, which is headquartered in Edinburgh, on 25 May.

The auction, which will be live online at 12 noon (GMT) on 25 May at Lyon & Turnbull, is set to attract interest from bidders across the globe. It is hoped the bottle may break the world record for the most expensive bottle of whisky ever sold which is $1.9m. For any amount the sale achieves above £1.3m, 25 per cent will be donated to the Marie Curie charity.

The Intrepid was officially certified by Guinness World Records when it was bottled last year. The bottle, which contains 32-year-old whisky from world-renowned The Macallan Distillery, contains the equivalent of 444 standard bottles. 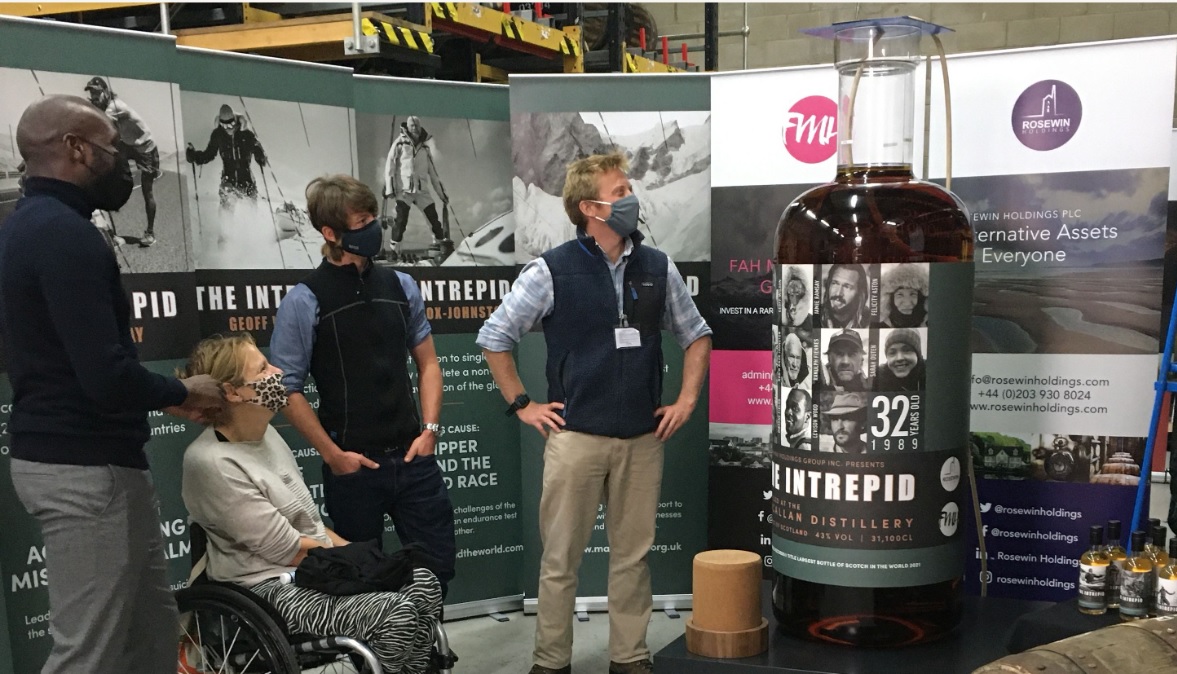 Daniel Monk and the team behind The Intrepid, a partnership between Fah Mai and Rosewin Holdings, were inspired by a passion for adventure, exploration and a desire to help raise money for several charities.

They named The Intrepid to celebrate the drive and record-breaking achievements of 11 of the world’s most pioneering explorers who are featured on the bottle. These include such luminaries as Sir Ranulph Fiennes, Sir Robin Knox-Johnston, Dr. Geoff Wilson, Karen Darke MBE, Olly Hicks, Sarah Outen MBE, Dwayne Fields FRGS, Levison Wood FRGS, Felicity Aston MBE and past Scottish Adventurers of the Year Jamie Ramsay and Will Copestake.

The project is supporting the explorers chosen environmental, physical and mental well-being charities. These include Marie Curie, selected by Sir Ranulph Fiennes, and Campaign Against Living Miserably (CALM), chosen by Jamie Ramsay.

Colin Fraser of Lyon & Turnbull, who will lead the auction, said: “I’m sure there will be significant global interest in the auction of The Intrepid, a unique collection spearheaded by the record-breaking bottling standing at an incredible 5ft 11 inches tall.

Bidders will have the chance to buy a piece of Scotch whisky history. They will become the owners of an exclusive 32-year old single-malt Scotch from what is widely regarded as one of the world’s best distilleries, The Macallan.” 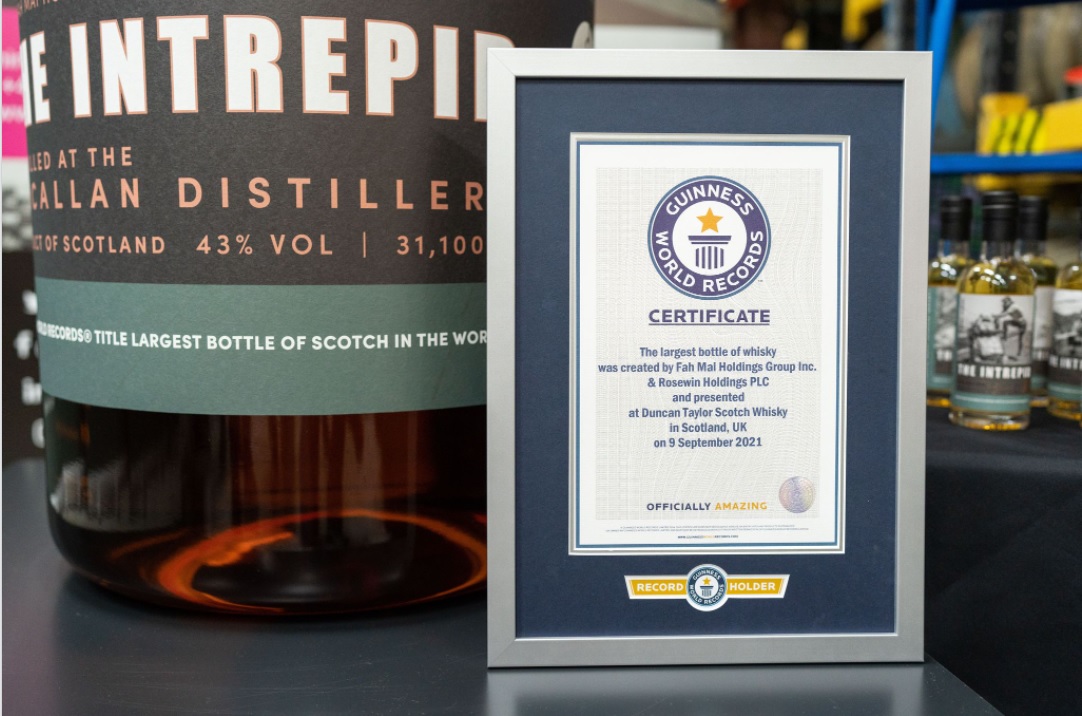 Founder of The Intrepid Project, Daniel Monk, said: “The Intrepid could only have been made possible by the explorers and their commitment. They showed unquestionable personal drive and through the auction we will support a wide ranging group of charities with significance to the explorers. This will become part of The Intrepid’ s legacy and leave a lasting impact.”

After maturing in two sister casks in The Macallan’s Speyside warehouse for 32 years, the exclusive liquid was bottled last year by Duncan Taylor Scotch Whisky, one of the leading independent whisky bottling companies.

To commemorate this momentous event, a small number of exclusive bottle sets were also produced. These comprise a collection of 12 bottles, each filled with the remaining 32-year old The Macallan whisky from the same casks used to fill the record-breaking bottle. Each set includes a replica of the main bottle design along with individual versions dedicated to each of the explorers associated with the project. 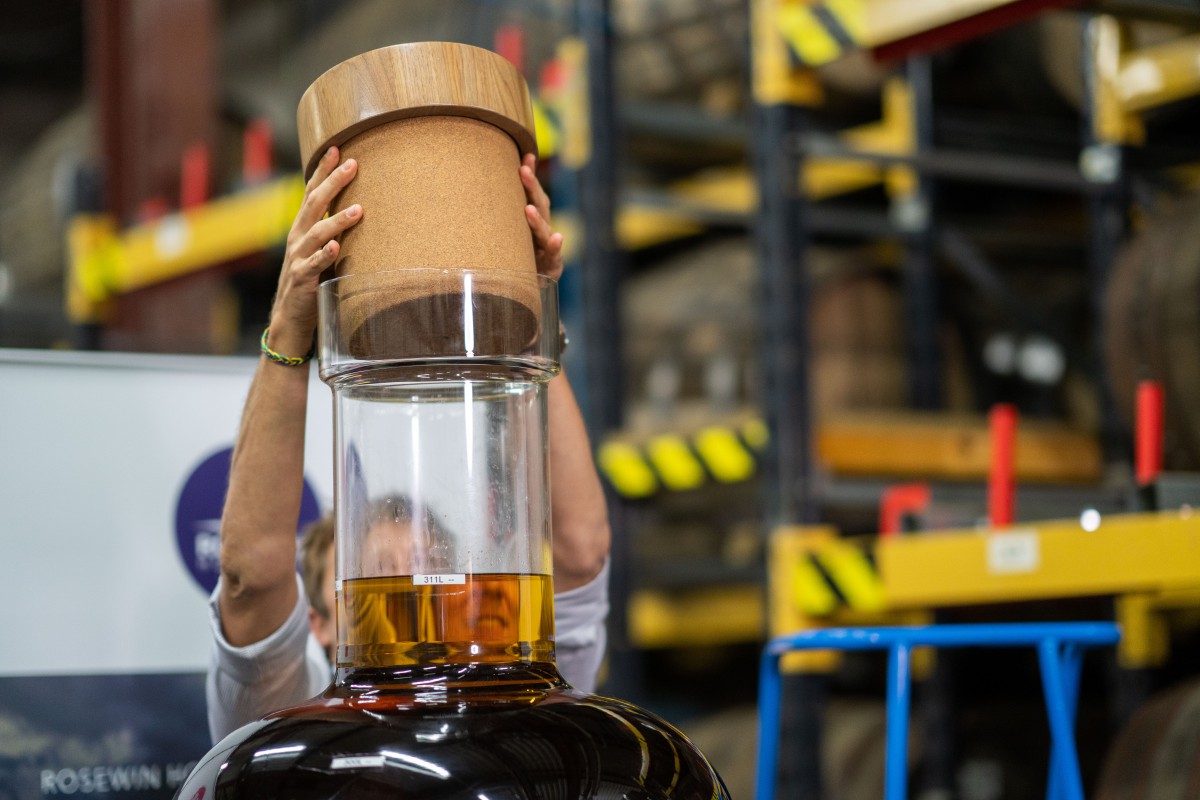 Image: A full stretch for Daniel Monk, founder of The Intrepid, to seal in the 311 litres of 32 year old Macallan single malt –  Image courtesy of Fah Mai and Rosewin Holdings

The entire Intrepid Collection, led by the 311-litre bottle, will be auctioned at Lyon & Turnbull and is set to generate international interest.

Charles MacLean MBE, renowned whisky expert and Master of the Quaich, said: “The Intrepid is an elegant whisky, with subtle complexity. Its pale hue implies second or third fill casks, which has prevented the flavour being dominated by wood extractives. Intriguing and easy to enjoy straight – with (many!) friends – on any occasion.”