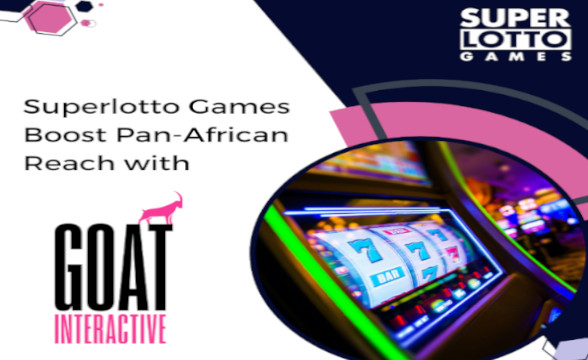 Developer of online live lottery, slots and instant games Superlotto Games has launched with GOAT Interactive, an established operator group that focuses on the African market. This will enable Superlotto Games to pursue regional growth by leveraging GOAT Interactive’s own brand standing, including popular options such as Premier Bet, which is largely seen as one of the flagship African operators in the continent.

Superlotto’s own development track record is impressive. More importantly, the developer stands out by virtue of being able to deliver impressive engagement and retention metrics across its entire portfolio of titles. Among the first games to debut with GOAT Interactive is Football, a soccer-themed title, which is just part of Superlotto’s bespoke and customizable branding format for its titles.

The first title is picked aptly to coincide with the launch of the World Cup this year and it’s going to help make an immediate impression on the local market. Superlotto is also a trusted partner in the market, as it has received a BMM certification in South Africa and plans to expand across the entire region. Commenting on these recent developments, Superlotto Games CCO Milda Mikelioniene had this to say:

We are thrilled to bring our high-quality games to GOAT Interactive’s players in Africa. With a strong presence in 20 countries and a number of sites that live in the region, they represent the perfect partner for us to exhibit our next-level portfolio to an even wider audience.

Always on the Lookout for New Opportunities

Mikelioniene added that the quality of the games Superlotto manufactured was well-known in the industry and the added benefit of creating bespoke and tailored experiences was only another benefit for local partners and GOAT Interactive’s own brands.

The partnership was greeted by GOAT Interactive Director of Casino Karen Hope who said that the group is always on the lookout for top-performing games and suppliers, such as Superlotto Games:

We want to provide players in Africa with only the best the industry has to offer, and Superlotto’s attention to detail in the realm of games development is second to none.

Superlotto already has developed more than 80 online games and it has been able to sign a number of global partnerships with prominent and regulated operators, guaranteeing the company’s own industry standing. Among the partners that Superlotto has supplied with its games are brands such as BtoBet, Parimatch, Slotegrator, Betsson Group, and many others.