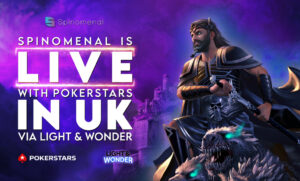 Spinomenal has launched its slots portfolio for the first time in the UK thanks to its new PokerStars partnership.

Spinomenal’s shared Universe concept was a core factor in the agreement. This industry-first vision means PokerStars players can immerse themselves in a world where their favourite characters from separate Spinomenal series coexist in the same environment.

The tie-up between Spinomenal and PokerStars also goes beyond the UK as it will launch games for operators working on an MGA licence with more exciting regulated markets to come.

Spinomenal’s CEO, Lior Shvartz, said: “Our first UK operator launch is a major milestone for Spinomenal and what a way to begin by signing with PokerStars. Getting to this stage has been a massive team effort from both PokerStars and Light & Wonder, now we’ll see the positive impact our games will bring to a new audience.”