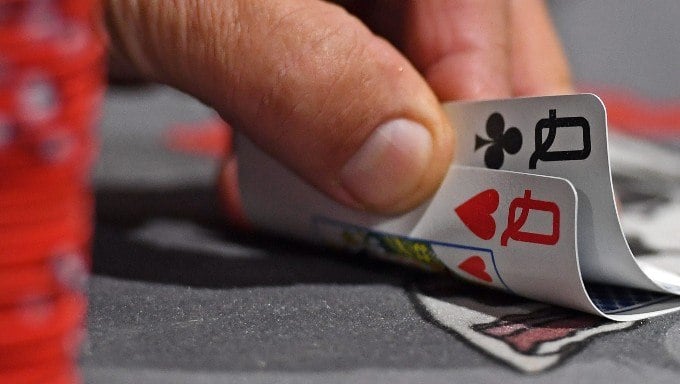 Joey Weissman’s path to winning the first-ever BetMGM Poker Championship was paved by a rare feat.

Weissman drew a royal flush, 10-through-ace of diamonds, to knock one opponent out of his way at the main event in the Aria Resort and Casino on the Las Vegas Strip. The tournament ended Sunday.

A royal flush is the best possible hand in Hold’em poker, the traditional game in championship tournaments, but it doesn’t come often. The chance of drawing a royal flush in Hold’em is 1 in 30,940 hands.

As an added twist, Weissman’s royal flush beat a player, Michael Wang, who had a normally powerful full house. Wang finished fourth in the tournament.

As the BetMGM tournament winner, Weissman, of Syosset, New York, took home $224,236, along with a championship trophy and ring. Weissman defeated a final opponent at the main table, Paul Hoefer, to win the title.

On its Twitter feed, BetMGM Poker thanked those who made the inaugural tournament “a great turnout.”

“Had a good run in Vegas,” BetMGM Poker tweeted.

The tournament attracted 343 players, including 68 who qualified online, according to the Las Vegas Review-Journal. The online qualifiers received a complimentary travel package that included a flight to Las Vegas and five nights at the Aria.

The online entrants could compete in markets where the BetMGM Poker app is legal and live. These jurisdictions are Ontario, Canada, and the U.S. states of New Jersey, Pennsylvania and Michigan.

The BetMGM Poker Championship is one of two high-profile poker tournaments that attracted the world’s top pros to the Las Vegas Strip this summer.

The other is the World Series of Poker, underway now at the Bally’s and Paris Las Vegas hotel-casinos. These Caesars Entertainment properties are connected by an interior walkway.

This is the first year the World Series of Poker, which dates back to 1970, is being held on the Strip. The WSOP began this year on May 31 and concludes July 20. The main event starts Sunday.

The WSOP was first held in Las Vegas at the Horseshoe Club in downtown’s Glitter Gulch. It later relocated to the off-Strip Rio south of downtown, before moving this year to the east side of the Strip.

Some players at this year’s WSOP, including 1989 main event winner Phil Hellmuth, have been sidelined with COVID-19. Hellmuth later was medically cleared to participate.

Veteran poker pro Doyle Brunson recently stepped away from the WSOP out of concern that COVID-19 was spreading at the tournament.

On Thursday, the 88-year-old Brunson tweeted an update, saying he is staying out of all WSOP events this year “on the advice of my doctor.”