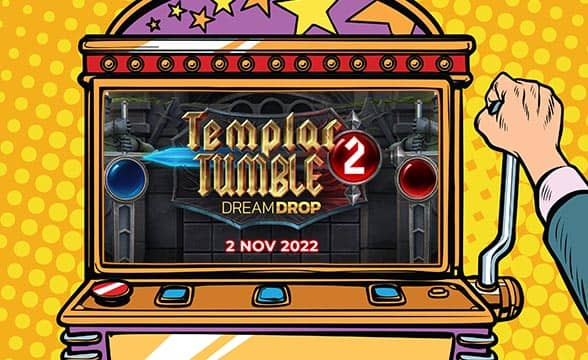 Award-winning, B2B multi-product provider for the iGaming industry, Relax Gaming, announced the release of a new slot hit. On Tuesday, the company unveiled the launch of Templar Tumble 2 Dream Drop, its latest addition to its Tumble series. The new release is a sequel to the popular knight-themed Templar Tumble that was released in March 2021 by Relax Gaming.

Brave Knights Prepare for a Crusade

The knight-themed Templar Tumble 2 Dream Drop seeks brave knights that are ready to take up arms and start a crusade. As the title suggests, it features Relax Gaming’s Dream Drop progressive jackpot. Like the first version of the game, players are facing the symbols in the mid of the screen. However, in Templar Tumble 2 Dream Drop, there are two knights, guarding the reel on each side. Relax Gaming’s latest title stands out with smooth gameplay, pleasant graphics and great sound effects.

Within the base game, players seek to match different symbols. Each spin introduces blocker symbols and active symbols. To win, the players need to match active symbols on consecutive reels. Once this happens, the winnings symbols are removed and new ones drop in their place, further expanding the option for additional prizes.

Templar Tumble 2 Dream Drop players that match five marked symbols can activate a Free Spins level. During Free Spins, the players are awarded Mystery Reveal and Win Multiplier features at the end of every spin. Those activate a meter that continues to build up and doesn’t reset between each spin.

If a player hits six DD symbols within the Jackpot Spin, they trigger Dream Drop Bonus. According to Relax Gaming, after that “spins are played until one of the reels is filled by DD symbols, and the corresponding jackpot is won.” There are five different jackpots that can award the players: Rapid, Midi, Maxi, Major or Mega.

“Templar Tumble 2 Dream Drop has all the gameplay allure of its predecessors with a stylish new theme and features that fans old and new are going to love.“

Simon Hammon, Relax Gaming’s CEO, revealed that the company’s Tumble series proved to be highly popular and Templar Tumble solidified its place as a favorite title for players. Now, according to him, the sequel of the game brings further excitement with the Dream Drop feature. In conclusion, Hammon said that the recently released title offers features and a new theme that will appeal to both return and new customers.