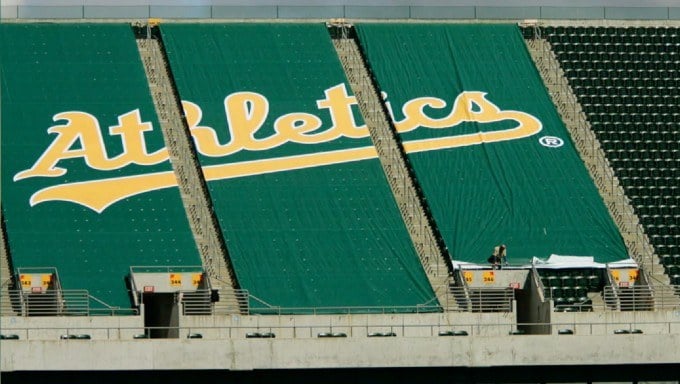 Las Vegas is still in play as a potential relocation site for the struggling Oakland Athletics.

Southern Nevada casino owner Phil Ruffin was scheduled to attend meetings with A’s executives in the Bay Area this week to discuss property on the Las Vegas Strip for a major league ballpark, according to the Las Vegas Review-Journal.

Ruffin’s Southern Nevada holdings include the Circus Circus hotel-casino on the west side of the Strip and adjacent Las Vegas Festival Grounds.

The 37-acre festival site has been discussed as one of several Las Vegas-area locations that could be suitable for a Major League Baseball stadium.

The A’s Triple-A farm team, the Las Vegas Aviators, play in a minor league park about 20 minutes west of downtown near the Red Rock hotel-casino. The park is too small right now for major league requirements.

Oakland officials are attempting to win City Council approval for construction of a new stadium at that city’s waterside Howard Terminal. A decision is expected soon.

Oakland Mayor Libby Schaaf recently entered the fray over the team’s possible relocation by referring to Las Vegas as a “gross desert.”

One Oakland team, the NFL’s Raiders, already have relocated to Las Vegas. The Raiders play their home games in Allegiant Stadium just west of the Strip.

The Raiders kick off the NFL preseason Thursday against the Jacksonville Jaguars in the annual Hall of Fame game in Canton, Ohio. At Caesars Sportsbook, the Raiders are favored by 2.5 points.

The A’s have struggled this season at Oakland’s RingCentral Coliseum, which opened in 1966.

The Wall Street Journal even reported on the team’s poor record on the field and its low home attendance this year. One recent game only attracted 2,703 fans.

Entering play on Wednesday, the A’s were in last place in the American League West, 28 games behind the division-leading Houston Astros.

The A’s are one of the teams with the lowest odds (+500000) at FanDuel Sportsbook to win the World Series this season.

The A’s have a regular-season history with Las Vegas, dating back to 1996.

That year the team played its first six regular season games at Cashman Field just north of the downtown casino district. The games were held in Las Vegas while the Coliseum was being renovated in Oakland.

In games against the Toronto Blue Jays and Detroit Tigers, the A’s went 2-4 at Cashman Field.

If the A’s relocate to the site Ruffin is pinpointing, the team would establish another historical connection to Las Vegas.

That general area at the southwest corner of the Strip and West Sahara Avenue once was the location of the El Rancho Vegas, the first resort hotel on Highway 91 to Los Angeles, now known as the Strip. Opened in 1941, the resort burned down in 1960 in a suspicious fire.

Circus Circus, which opened in 1968 and is still in operation near the festival grounds, also has a prominent history, including an early connection to the Mob.

In the 1970s, an expansion project at Circus Circus was financed by Mob-connected Teamsters loans arranged by the Civella crime family of Kansas City, according to The Mob Museum.

Also, the Chicago Outfit’s Tony “The Ant” Spilotro, using the name Anthony Stuart, operated a jewelry and gift shop at Circus Circus during that period.

In the 1995 Las Vegas Mafia movie “Casino,” actor Joe Pesci portrays a character based on Spilotro.