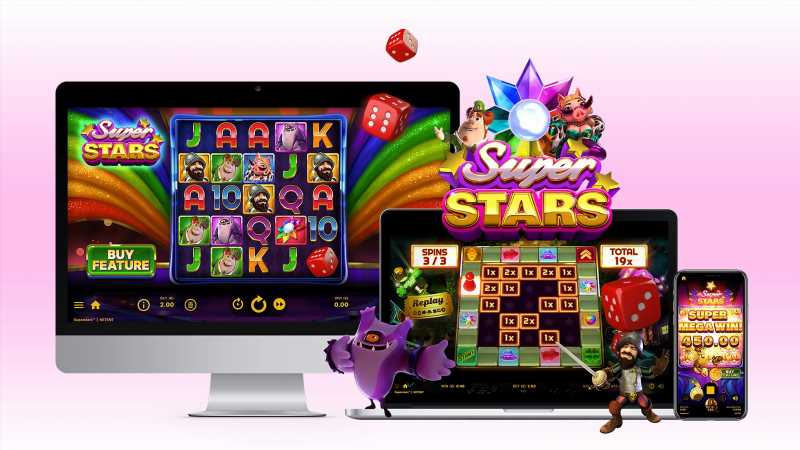 Evolution's NetEnt announced Thursday the launch of its new online slot Superstars, starring the brand's most iconic characters as they “come together for a party” in the title. The company's new product “brings to the table an unparalleled Bonus Game experience” featuring Finn, Gonzo, Lady Pig, Space Wars Brute, and the Starbust octagram.

Free Spins will elevate the player to the Bonus Game, where a board game envelopes the reels. Players can collect Dice when entering the Bonus Game and during Free Spins, which will allow them to move a red token around the reels. If the red token lands on a special square it will trigger a NetEnt character’s Bonus Feature, potentially increasing the Multipliers on the Free Spins reels.

If the player is lucky to fill all the reels with Multipliers during Free Spins they will end up in the Final Game. Here, the player will have the chance to move the red token around the board, with each position they land on either awarding Dice throws or increasing the overall total Multiplier.

Entering the landscapes of home-grown NetEnt characters, players will arrive at the Bonus Game (and Final Game if they are lucky), where they can enjoy bonus features, Multipliers, and a Wheel mini-game.

Todd Haushalter, Chief Product Officer at Evolution, said: “Thanks to the excellent work of our team, we have created a landmark game, jam-packed with action and features. Paying homage to NetEnt’s most iconic titles and the best-known characters, the Bonus Game of Superstars brings wildly different outcomes to players every single time they are lucky enough to enter.”

“The unique atmosphere, fantastic soundtrack, and novel animations of our well-known characters, alongside the wide range of features, will ensure that both slot veterans and new players alike will find something to love about Superstars,” Haushalter added. “Let us roll out the red carpet, and let the Superstars entertain you!”

NetEnt announced this month as well the release of another new slot game, Bee Hive Bonanza, which features 'potential prizes sweet as honey.' Set in a medieval, bumblebee-themed environment, the diligent bees of this online slot game are set to 'win over players' hearts at the first glimpse.'

'Busy bees fly across the five-row, five-reel slot to make sweet nectar while protecting their queen in a quaint countryside landscape of rolling green hills and colorful blooming flowers,' a press release explains. When the Bee Hive symbols appear alongside Bee symbols, they will react and award instant cash prizes to the player. Beyond the original Bee Hive symbol, the Multiplier and Adder variations further boost potential winnings.