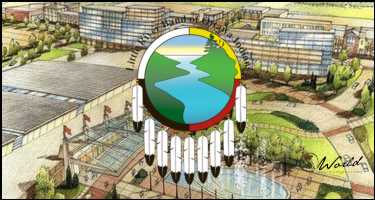 In the American state of Michigan and the federally-recognized Little River Band of Ottawa Indians has reportedly announced that it is to resubmit its application to bring a casino to an 86-acre plot of land near the western city of Muskegon.

According to a Wednesday report from the online newspaper at MLive.com, the tribe purchased the off-reservation plot some 16 years ago so as to host an envisioned $180 million venue complete with a 70,000 sq ft casino offering a selection of 1,700 slots alongside 35 gaming tables. The source detailed that this plan received a massive boost in December of 2020 when the United States Department of the Interior bestowed its approval and urged Michigan Governor Gretchen Whitmer to follow suit.

However, the tribe was left disappointed in June when the Midwestern state’s governor failed to sign off on the envisioned project in advance of a compulsory deadline due to concerns relating to the compatriot Grand River Bands of Ottawa Indians. This latter group is in the process of applying for federal recognition and the Democratic politician is purportedly apprehensive that a positive ruling would allow it to construct an on-reservation casino only a few miles away near the city of Grand Rapids.

A statement issued by Whitmer on May 23 reportedly read…

Nevertheless, the Little River Band of Ottawa Indians reportedly remains eager to bring its envisioned Lakeshore Casino and Resort project to fruition and has recently received further encouragement from the United States Department of the Interior. The tribe’s Chief Executive Officer, Larry Romanelli, purportedly declared that the federal government department is supportive of the resubmission plan as the prospect of having a venue in southern Muskegon County additionally offering a 220-room hotel and multiple conference spaces has garnered ‘huge support from the community’.

“The Department of the Interior said ‘sure you can submit another package and the timeline shouldn’t be as long as we know it has huge support from the community’.”

The Little River Band of Ottawa Indians reportedly spent almost 14 years and $30 million to develop and refine the proposal for its Lakeshore Casino and Resort dream, which included the commissioning of extensive studies regarding the proposed project’s possible impacts on the local environment and community. With this in mind and Romanelli purportedly disclosed that the second run at approval for the Fruitport Township scheme could take much less time and be secured in as little as one to two years.

In signalling his own support for the casino project from the Little River Band of Ottawa Indians and Fruitport Township Supervisor Todd Dunham called on Whitmer to approve the plan despite the fact that the original deadline has been and gone. The Democratic figure purportedly proclaimed that the United States Department of the Interior reaffirmed its support of the Lakeshore Casino and Resort scheme last December and ‘does extensive analysis’ that the governor’s office ‘should be able to rely on’.

A statement from Dunham reportedly read…

“The Department of the Interior said it has never seen a project with so much support. The idea that this interferes with another tribe is just a smokescreen.”