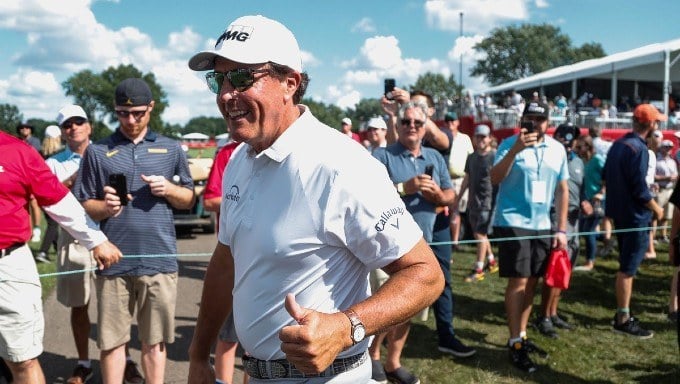 Despite the controversy and uncertainty surrounding the new tour, LIV Golf Invitational Series is happening. The first event of the Saudi-backed golf series starts on Thursday at Centurion Club near London.

Here’s a breakdown of the event.

The new series is headlined by former No. 1 and two-time major champion, Dustin Johnson, who has resigned his membership of the PGA TOUR to play in the LIV Golf Series. It’s been reported Johnson will receive more than $100 million for joining the league, in addition to any prize money he wins. Since joining the PGA TOUR in 2007, Johnson has amassed $74 million in career earnings.

The move also means Johnson won’t be able to represent the USA in future Ryder Cups.

“I don’t want to play for the rest of my life,” Johnson told the BBC. “This gives me an opportunity to do what I want to do.

“The Ryder Cup is unbelievable and has meant a lot to me, but ultimately, I decided this was best for me and my family.”

Phil Mickelson is the other marquee name entered in this week’s field. Mickelson hasn’t competed since the Saudi International in February after making controversial comments about the Saudi golf league.

“I am ready to come back to play the game I love but after 32 years this new path is a fresh start, one that is exciting for me at this stage of my career,” Mickelson said in a statement posted online. “I am incredibly grateful for what this game and the PGA TOUR has given me. I would like to think that I have given back as well, but now I am excited about this new opportunity.”

Johnson is the highest-ranked golfer in the field (13 in Official World Golf Ranking). Louis Oosthuizen (20), Kevin Na (33), Taylor Gooch (34) and Sergio Garcia (54) are the other top-ranked players competing this weekend.

Each tournament will consist of three 18-hole rounds with no cut involved. Unlike the traditional tee time format used by the PGA TOUR, each LIV Golf tourney will utilize a shotgun start, meaning all golfers start at the same time on different holes.

The main draw for the players is the prize money. Each winner will receive $4 million, while even last place gets awarded $120,000.

There is also a team format element. At each event, players will be split into 12 four-person groups based on the results from the draft the week of the tournament. Each team will have a captain who will select three other teammates.

The top stroke play scores from each team from the first two rounds will count towards the team’s score. In the final round, the best three scores will count, and the group with the lowest score after 54 holes will be the team champions.

Can you bet on it?

As of Tuesday morning, FanDuel, DraftKings or BetMGM have yet to post odds for the LIV Golf Series. None of the operators have yet to reply when reached for comment on whether they will feature odds on the tournaments.

Traditionally, golf odds for the week’s tournament come out on Monday morning. If books do take bets on the LIV Golf Series, the individual market could open during a similar timeframe, but the team odds wouldn’t come out until after the draft each week.