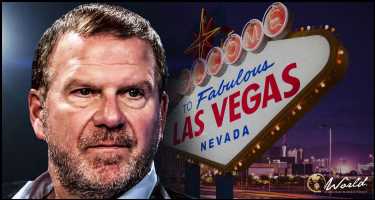 In the western American state of Nevada, the Clark County Commission has reportedly given Fertitta Entertainment Incorporated the green light to bring a 43-story casino hotel to a six-acre plot of Las Vegas Strip land.

According to a Wednesday report from the Las Vegas Review-Journal newspaper, the firm run by billionaire American businessman Tilman Fertitta (pictured) is already responsible for the Golden Nugget Las Vegas facility and similarly gambling-friendly venues in the states of New Jersey, Louisiana and Mississippi. The Houston-headquartered enterprise purportedly paid some $270 million in June so as to purchase the parcel situated on the southeast corner of Las Vegas Boulevard and Harmon Avenue and is now looking to fill this space with a 2,420-room development also hosting a 2,500-seat theater, a selection of top-class restaurants and a 91,000 sq ft convention space.

Rebecca Miltenberger from Las Vegas law firm Brownstein Hyatt Farber Schreck LLP reportedly spoke to the Clark County Commission on behalf Fertitta Entertainment Incorporated on Wednesday and told the seven-member body that the coming facility would look to be a ‘high-end casino resort’ additionally featuring a 37,000 sq ft spa and fitness center, a small wedding chapel and an auto showroom. The representative was purportedly joined in her advocacy by a group of more than 20 local carpenters but declined to specify when construction could begin or what the coming venue would be called.

“We are very excited to bring this project to fruition over the next two years.”

Fertitta Entertainment Incorporated is additionally behind the Golden Nugget Online Gaming Incorporated enterprise and inked a deal worth roughly $43 million in April so as to acquire the Wildwood Hotel and Casino in Colorado. The enterprise earlier disclosed that it will eventually look to rebrand this four-story Cripple Creek venue currently owned by American Gaming Group LLC under its own Golden Nugget tag while retaining the entirety of its 300-strong workforce.

The Las Vegas Review-Journal reported that Fertitta Entertainment Incorporated is not the only one with plans to build on this stretch of the most famous road in Nevada as investments firm Gindi Capital is looking to realize a 300,000 sq ft retail complex on an adjacent plot. This could purportedly be joined by an analogous four-story facility across the street from local developer Brett Torino and real estate giant Flag Luxury Group LLC, housing a 400-seat outlet of the Ocean Prime seafood and steakhouse chain.

The newspaper reported that construction on the long-awaited Fontainebleau Las Vegas casino resort has resumed a little over two miles to the north after the coming 67-story facility was reacquired in early 2021 by its original developer, Jeffrey Soffer. An analogous distance to the south and the source divulged that building work began this summer on the $20 million Dream Las Vegas boutique hotel with plans to have this 531-room venue open by the conclusion of 2024.