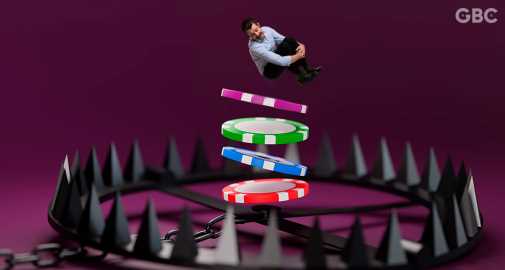 Everyone who is involved in the gambling industry should understand that this entertainment hobby is fun as long as you do not cross the line of addiction. As a rule, this happens after a big win, when it starts to seem to the player that they can turn gambling into a source of income. However, the reality is much more prosaic. Instead of the desired profit, addicted gamblers see only regular losses. This article is dedicated to such irrational players. And their stories will definitely serve as valuable lessons for you.

David Bradford and his 30 years of gambling

David Bradford continued to struggle with addiction for 30 years without his wife even noticing it. But as we know, everything hidden becomes clear someday, and this case was no exception. After 35 years of married life, the player's wife Denise answered the phone. And during the conversation, some unfamiliar voice informed her that David had a £500 000 debt and was sentenced to two years in prison. The gambler's impulsive behavior and deceitful actions destroyed their hopes for a quiet life as the couple will have to pay off all the debt no matter what.

This woman had a beautiful home and a stable job with an average income prior to her gambling adventure. Although Michelle paid enough attention to her husband, daughter, and mother, none of them knew that she also wagers her money regularly. First, Singlehurst lost all the money she had. But after a while, the family decided to sell the house for £440 000 and move into a larger property. As you might imagine, Michelle lost all the money she received for the house. Eventually, her husband found out about her destructive passion, took their daughter away from her, and left. As for the woman, she returned to normal when she survived the near-death situation. But even that does not change the fact that she lost £550 000 over the course of three years.

Being a successful financier, Viktor had zero reasons to be one of the members of our list. Nevertheless, this happened because even excellent financial education and entrepreneurial qualities did not save him from gambling addiction. Gjonaj was obsessed with lottery draws and was spending millions of dollars on tickets. In fact, his financial scheme brought him $19 million overall. And most likely, he will have to spend 20 years in prison to atone for this crime.

Matt Blanks' losses in 10 years of trips to Las Vegas

Many of us perceive Vegas as a city with endless smiles and entertainment events. And although this place is indeed considered the gambling capital of the world, it has another side. At first, Matt Blanks experienced many of Las Vegas’ benefits through profitable betting. But over time, luck left him and did not return to him for 10 years. During this period, Blanks lost not only the inheritance he got from his grandmother but also the £200 000 that belonged to his father. Matt's total losing score reached £700 000 within a decade.

To end our list on a more pleasant note, let us look at the history of Paul Pettigrew. Of course, like previous gamblers, he had a serious addiction that developed at the age of 18. From then on, Paul lost around £25 000 annually until he was 22. After that, Pettigrew told his parents about his problem, and they understood him. Instead of hating him for being weak and compulsive, they helped him get proper psychological treatment and get back on his feet.