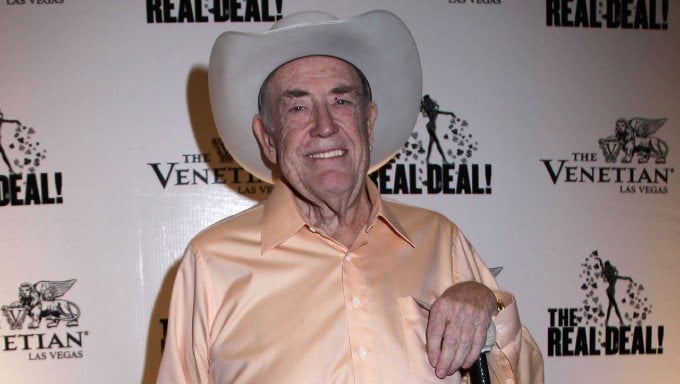 Saying COVID-19 is “everywhere” at the World Series of Poker in Las Vegas, legendary card player Doyle Brunson is the latest to step away from the event for now.

“I’m gonna have to miss some tournaments,’” the 88-year-old Brunson tweeted Saturday. “I wanted to play but there are 2 unvaccinated in my house.”

He did not indicate whether he is vaccinated or has been infected with the coronavirus, though his tweet implied he is stepping aside as a precaution.

Brunson added it looks like COVID-19 “is everywhere at the WSOP” this year. The WSOP began May 31 and runs through July 20, with several prize-money competitions leading up the main hold’em event, which starts July 3.

Known has Texas Dolly, Brunson is a two-time WSOP winner and author of the 1978 how-to book, “Super/System: A Course in Power Poker.” Over the years, the book became a guide for aspiring poker champions.

Radar Pictures has announced it is producing a biopic about Brunson. His colorful life has included poker showdowns in Texas roadhouses and Las Vegas card rooms during Southern Nevada’s Mob era.

The Hollywood production is in its early stages. No date has been set for when the movie will be released.

looks like covid is everywhere at the WSOP. I'm gonna have to miss some tournaments I wanted to play but there are 2 unvaccinated in my house.

Among players sidelined with COVID-19 is Phil Hellmuth, the 1989 WSOP main event winner and a competitive player known as the “Poker Brat.”

Hellmuth, who tested positive last week, tweeted over the weekend that he has tested positive again. In one tweet, Helmuth said he is in a suite at the Aria hotel-casino on the Las Vegas Strip.

From his suite, Hellmuth tweeted that he is playing in a WSOP online poker tournament. He said he won’t be back at the in-person events until he tests negative and has been told by a doctor that he is not contagious.

‘Quite A Few’ Players Infected

Last week, poker player Mike Gorodinsky also tweeted that he tested positive for COVID-19, adding he “won’t be around WSOP for a while.”

“Seems like quite a few people who played the dealer’s choice have it currently,” Gorodinsky tweeted. “I personally won’t be back until I have a negative test and significantly reduced symptoms.”

Hellmuth responded to Gorodinsky on Twitter, saying he also thinks he was infected in the dealers’ choice event earlier this month.

Another poker player sitting out the action, at least temporarily, is David “Gunslinger” Bach.

Bach tweeted he is staying away “for the time being” because of the number of COVID-19 cases at the event this year and his personal risk factors.

In a tweet, Bach complimented Hellmuth, Gorodinsky and others “for being responsible good humans and testing and sitting out.”

Poker player Joe Heinzmann tweeted that he felt safe at last year’s event “with vax requirements and an atmospheres of cooperation.”

“This year, not so much,” he tweeted. “There are players openly saying they will play sick, that they will not test, even if symptomatic and ridiculing those who are appropriately concerned.”

First Year On The Strip

The WSOP is being held on the east side of the Las Vegas Strip at two Caesars Entertainment properties, Bally’s and Paris Las Vegas. These two center-Strip resorts are connected by an interior walkway.

This is the first time the WSOP has been held on the Strip. Since 1970, it was played first at the Horseshoe Club in downtown Las Vegas and then at the off-Strip Rio hotel-casino south of downtown.